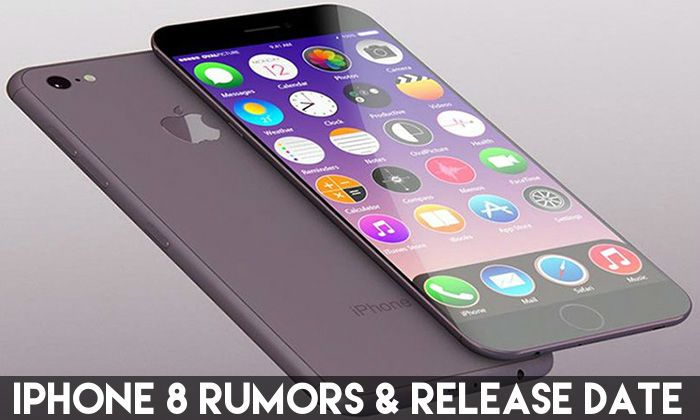 Everything On The iPhone 8 Rumors & The September 12 Release Date For those who do not know, 2017 is a big year for the manufacturing giant, Apple. The tech company will is celebrating its 10th year anniversary of the iPhone. People are excited for what is in store for this year’s release of the much-anticipated iPhone 8.

With only a few weeks to go before the big launch of the latest device, there are many rumors already circulating about it including one leak from Apple itself.

The Hardware: Living from Edge to Edge

Unlike its predecessors, the iPhone 8 is said to have a radical design with a display from edge to edge. It has been said that Apple will do away with the physical Home button and the only bezel that will be left is a small area dedicated for a front-facing camera.

Apple confirmed that it is working on a facial recognition technology so expect that the Touch ID may be eliminated in favor of the former. Because of its edge to edge design, the device may have a size similar to the of the 4.7 inch iPhone but with a display area same as the 5.5 inch one. However, there are also rumors suggesting that the display area will be 5.8 inches with 5.15 inches of usable space.

Read this related article: A Complete Review Of The iPhone 7﻿﻿﻿﻿﻿

Since there is a huge possibility that the physical Home button will be eliminated, gestures might be used to navigate the phone. The display screen is said to be made of flexible plastic OLED rather than the usual LCD. This switch will help Apple come up with a thinner device with less power consumption but shows off a better display with higher contrast ratio and more true to life colors.

Let's hope that the new display is more durable than all of the previous models combined. Replacing the iPhone 8 screen will set you back $109. You can walk into our cell phone repair store in Austin Texas or use our iPhone mail in repair service that works for anyone in the USA.

Still, it is better to invest in a good case and tempered glass screen protector to avoid the costly repair.

Will Apple Go With An All Glass Body?

For the body, the iPhone 8 may veer away from the aluminum. Unlike its immediate predecessors, the latest device might be sporting a glass body similar to its great great grandparent, the iPhone 4.

The glass is said to be built around a polished frame of stainless steel just like the Apple Watch. It is also expected to be water resistant and hold up rain, splashes, and brief submersion in water. The water-resistant feature has also been confirmed by Apple’s supplier and such feature may extend to all iPhone models moving forward.

Inside its body, the iPhone 8 is expected to sport a 10-nanometer A11 chip which will help it be faster and more efficient. New technologies like wireless charging and facial recognition can also be expected. For higher-end models, optical image stabilization may be expected for both front and rear cameras.

The camera will also include 3D sensing capabilities that will allow it to locate and find the depth of objects in front of it. Such 3D capability will also help in its facial recognition features.

The Software & The A11 Chip

For this year, Apple will be sticking with its A11 chip for all iPhone models. The production for the newest chip began in May 2017. The chip is expected to give the users a faster and more power efficient performance compared to the present A10 chip.

The A11 can also lead to a better battery life that will surely be music to the ears of most users. The RAM of the iPhone 8 is similar to that of the iPhone 7 Plus, a 3GB one. The DRAM transfer speed of the latest models is expected to be 10-15 percent faster than the iPhone 7.

So What’s The Price to Pay?

Rumors have been circulating that the iPhone 8 will be the most expensive phone from Apple. The new OLED display, wireless charging, bio-metric features and improved camera performance have been pointed out as the causes for the price increase.

Some have priced the iPhone 8 at around $1,000 while others believed it will go beyond that. However, there are also rumors that lower-end models will be released for those who do not want to spend such a big amount of money on a new phone.

All articles written and published on The Austin Cell Phone are collaborative works done behind the scenes by people passionate about all types of electronic gadgets. We will publish reviews and informational guides that supports our business and your knowledge about your gadgets. Our aim is to inform you the reader so that you can make an informed decision whenever you need our services.